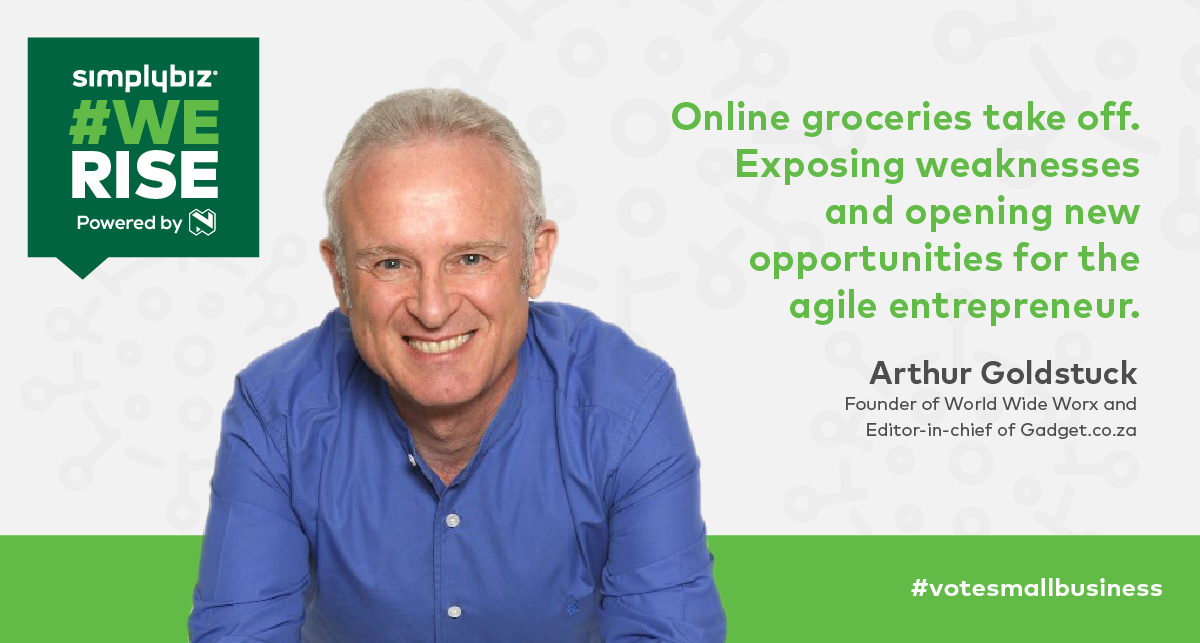 The Covid-19 lockdown has given an unexpected boost to one of the most complex forms of ecommerce, boosting grocery apps in South Africa, writes ARTHUR GOLDSTUCK

Who would have thought that videos of crowds in supermarkets would be a new form of horror movie?

In the age of coronavirus, such scenes send shivers up our spines for two reasons.

First, they represent both potential exposure to a deadly disease spread by random contact. If that isn’t chilling enough, the second reason is that the scenes tell us so much about our fellow human beings: how many disregard the global consensus that social distance is essential for beating the virus, and how many have such disregard for those around them.

Many people have no choice but to go to the supermarkets to buy essentials, but the crowds in supermarkets tells us we are seeing a “life-as-normal” attitude. This is as much the case in low-income areas as in affluent suburbs.

For the latter, there truly is no excuse: telephonic and online grocery ordering and delivery services have exploded into the national consciousness in recent weeks. Traditionally the most difficult form of ecommerce, due to having to maintain the “cold chain” from supermarket to home fridges, it is now suddenly the only form of ecommerce in South Africa.

As a result, we are seeing the biggest ever spike in both first-time online shopper numbers and the volume of online shopping by digital veterans. However, this forced revolution is also exposing the weaknesses of the existing players in this market – and opening opportunities to the agile entrepreneur.

Take Cindy Poluta, a veteran sports broadcaster. For several years, she has had the idea of starting a service to supply fruits and vegetables to homes and offices. She began having the app developed in November, and the service was ready to launch last month – just as lockdown began. Suddenly, she had to change her entire business model.

“By the time the app was finished being developed, by the time I got the bank accounts, the Payfast account, everything going, it went live, and suddenly everybody went into lockdown. So, I had no option but to offer home delivery because of the costs involved of having an app and having a Shopify store, and so on. Those are quite expensive and they charge you in dollars. I just decided to try Linden and surrounds, because I live in Linden. People have loved it. I'm delivering daily, and I'm really grateful to everybody for their support.”

It helps that her husband is a wholesaler who supplies fruit and vegetables to supermarkets – and is her wholesale supplier, too. This allows her to supply her customers either more cheaply or as competitively as the major supermarkets.

“He custom-makes my orders for me, so he charges me what he would charge retailers, and I get a delivery daily to my house. At first, I was doing the deliveries myself in my car, which has been an adventure. Now we are partnering with Uber Eats, and you should find Tree Sweets on the Uber Eats app. It definitely is a service that I'd like to offer after the lockdown because I do think people have seen the value.”

Ironically, the big retailers have given entrepreneurs like Poluta a massive gap to fill by not being able to scale up sufficiently to meet the demand, and limiting their delivery areas to the surrounds of specific stores. Both Pick ‘n Pay and Woolworths have extensive online offerings, but now typically have a three-week wait for delivery slots. They have been unable to scale up their fulfilment capacity to meet short-term lockdown needs, and tend to rely on smaller players who pick up groceries in their stores to meet the demand.

This summary of some of the independent grocery delivery apps and services provides an overview of the offerings, benefits and drawbacks:

Usually requires ordering the day before, for Johannesburg only. Delivery is free, but minimum order of R200 required for suburbs surrounding Linden. A minimum order of  R300, with free delivery, applies to suburbs a little further away. The ease with which one is able to order and the quality of the food more than make up for a limited range and highly specific quantities. Response to queries is almost immediate.

Started by Vutlharhi Donald Valoyi in 2016, Zulzi includes a wide range of retail outlets from which one can order groceries and medicine, delivered the same day. However, it can work out more expensively than other services, as it has both a R45 delivery fee and an admin fee based on the size of the order – and which can take the service cost over R150. The app also needs work on ease-of-use and providing information on where one is in the processes, as well as for notifications.

Bottles started life in 2016 as an on-demand alcohol delivery service via app, after founders Vincent Viviers, Enrico Ferigolli and Martina Mondelli spotted the gap while chatting over a braai. Last month it quickly pivoted to groceries when the lockdown began and alcohol sales were banned. It entered a partnership with Pick ‘n Pay but, given its tie-in with one of the biggest supermarket chains in the country, it has limited options on many categories of groceries, and many basic items are simply missing. However, delivery within four hours of ordering is the massive plus, along with the fact that there is no mark-up on in-store prices. Bottles charges a flat delivery fee of R45 and a service fee of R15.

Founded in 2018 by Lynton Peters and Ariel Navarro, OneCart services both Cape Town and Johannesburg. It uses various retail outlets and has an excellent ordering process. However, prices are well above those in-store, and it charges a concierge fee that goes up with the size of the order as well as the number of outlets used. As with Pick ‘n Pay, it allocates delivery slots and, last week, was up to 5 days away.

Numerous smaller players are providing phone and WhatsApp ordering options, ranging from Nels Farm Supplies to Moishe’s kosher butchery, but these are highly area-dependent. At the other end of the scale, fast-food apps like Uber Eats and Mr D have converted their operations to grocery delivery from outlets around the country.

When the Covid-19 crisis is over, many of these providers will find that their new customers will not be willing to go back to the old ways of shopping. Online groceries will be one of the many so-called “new normal” activities that most of us would never have considered before.